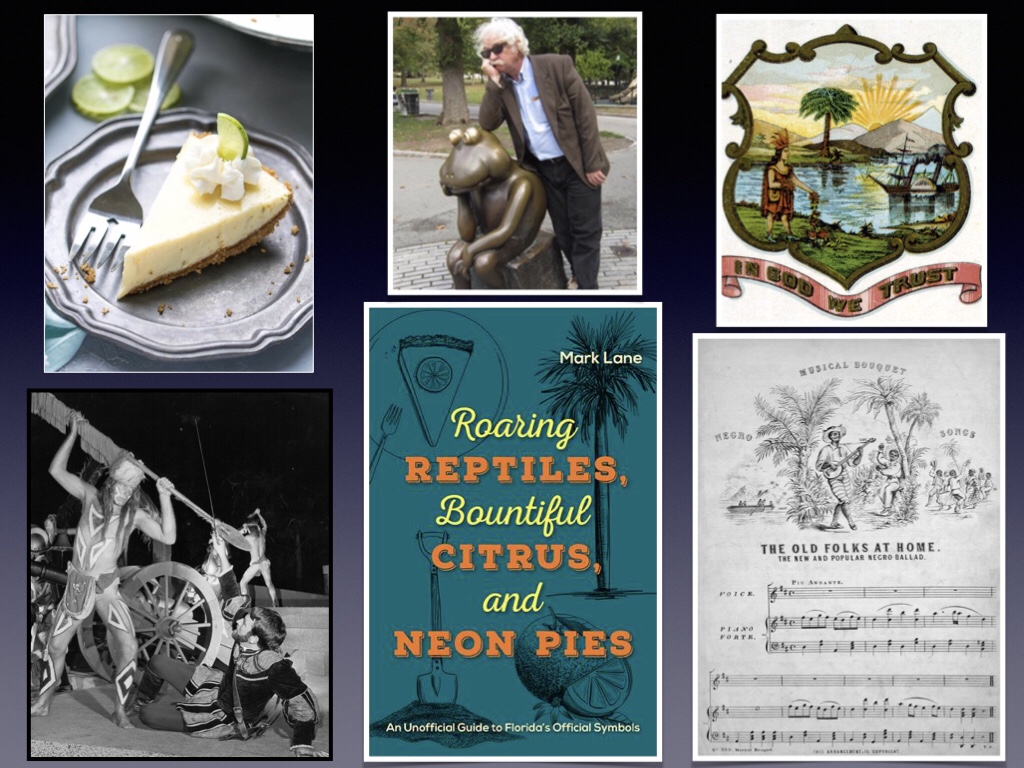 If you know anything about Florida you know that we shamelessly borrow from elsewhere to sort of fill in our blanks.

Snowbirds, iguanas and Burmese pythons to name just a few of our, um, exotics.

So it should surprise no one that Florida’s official state pie isn’t a product of Florida produce at all.

But can the celebrated Key Lime Pie really be Florida if it comes with “ping-pong ball sized limes from Mexico?”

This conundrum posed by Mark Lane, who has forgotten more about all things Florida than most of us will ever know.

Turns out necessity is the mother of pies as well as invention. Our indigenous key limes having been long blown away by hurricanes.

But never mind that. What’s important is that the Key Lime Pie (aka “the pink flamingos of Florida food”) stomped both pecan and sweet potato to sit atop Florida’s confectionary food pyramid.

I didn’t know all this until I read Lane’s new book. “Roaring Reptiles, Bountiful Citrus And Neon Pies: An unofficial guide to Florida’s official symbols.” (University Press of Florida).

Mark is an old pal. A long time columnist for the Daytona Beach News Journal he looks – and rather writes – like a Mark Twain Florida clone. That’s a complement, people.

But seriously, does the world need a book about our state song (“Old Folks At Home”), bird (mocking), play (“The Cross And The Sword”), tree (Sabal Palm) soil (Myakka fine sand) and whatnot?

And, really, don’t our elected legislators have better things to do than designate Glenn Glitter our official litter control mascot?

Well, maybe yes, maybe no. But state-blessed symbolism isn’t just symbolic of idle political hands doing the marketers’ work. “These totems and mascots are our attempts to pin down who we are, to make visible previously vague feelings of common identity,” Lane posits.

Plus, there are some really quirky stories attached to the branding of all things officially Florida.

After all, who would even remember State Sen. Joseph Johnson, of Brooksville, if his death in 2009 hadn’t reminded us that he was “the father of the Sunshine State license plate”?

And remember when a disgruntled House Democrat tried to replace the alligator with party-switching turncoat Jim Smith as official state reptile?

Oh, and while Destin Republican Charlie Clary failed to make the Eocene Heart Urchin Florida’s official fossil, he did manage to get a state law named after his beloved dog Dixie Cup.

But wait, what was so objectionable about fossilized urchin carcasses anyway? Turns out that to some nervous pols, they evoked an uncomfortable association with climate change, sea level rise,”mass extinction, evolution and worse.”

And there’s this to say about Lane’s book. It’s not all key lime froth and trivia. A hard-bitten newsman, he isn’t afraid to ask the tough questions.

Like: “If the manatee is truly our state spirit-animal, why is everybody okay with letting boats run over them all the time?”

And does Florida need an official play “about a state-sponsored military expedition that brought European religious wars to the New World”?

And “How did this happen?” This in reference to a state song that contains the lyrics “Oh darkies how my heart grows weary.”

And why are Confederate Memorial Day and the birthdays of Robert E. Lee and Jefferson Davis still official Florida holidays? (Think “white nationalists with bad haircuts.”)

Listen, if Florida ever needs an official Mark Twain clone, I’ve got just the guy.

Ron Cunningham is a sometime journalist who used to string words together at the Gainesville Sun before I retired to free lance and blog. If I still had a business card it would read: Ron Cunningham: Trained Observer Of The Human Condition. Because like The Donald, you know, ego. View all posts by FreeGNV